Majorana zero modes are fermionic states, each of which is an antiparticle of itself and is required to always appear in pair together with its partner. They are immune to decoherence from local noise sources and are attractive building blocks for quantum computers. Promising experimental progress has been made to demonstrate Majorana zero modes in materials with strong spin–orbit coupling proximity coupled to superconductors. We have recently established a novel material platform utilizing the surface states of gold for detecting the signatures of and understanding the interactions of Majorana zero modes. Using scanning tunneling microscope to probe EuS islands grown on top of gold nanowires, we have observed two well-separated zero-bias tunneling conductance peaks aligned along the direction of the applied magnetic field, as expected for a pair of Majorana zero modes. This platform has the advantage of having a robust energy scale and the possibility of realizing complex designs using lithographic methods. PNAS 2020. PRL 2019. Nano Lett. 2016. 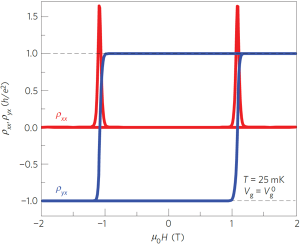 The quantum anomalous Hall (QAH) state is a topological quantum state displaying quantized Hall resistance and zero longitudinal resistance, similar to the quantum Hall (QH) state. However, while the QH effect requires a large external magnetic field, the origin of the QAH effect is the exchange interaction between electron spin and magnetic moments in ferromagnetic materials, and thus the QAH effect can occur even in the absence of external magnetic field. The QAH state can be experimentally achieved in a new topological insulator (TI) compound, V-doped (Bi,Sb)2Te3, with the zero-field longitudinal resistance down to 0.00013±0.00007h/e2, Hall conductance reaching 0.9998±0.0006e2/h and the Hall angle becoming as high as 89.993±0.004⁰ at 25 mK. Furthermore, the V-doped (Bi,Sb)2Te3 system is a hard ferromagnet with a large coercive field (Hc > 1.0 T) and a relative high Curie temperature (TC ~ 23 K). The realization of a robust QAH state in hard ferromagnetic TI is a major step towards dissipationless electronic applications in the absence of external magnetic fields as well as for metrology and spintronics applications. Nat. Mater. 2015.

Three-dimensional topological crystalline insulators were recently predicted and observed in the SnTe class of IV–VI semiconductors, which host metallic surface states protected by crystal symmetries. In this work, we study thin films of these materials and expose their potential for device applications. We demonstrate that thin films of SnTe and Pb1−xSnxSe(Te) grown along the (001) direction are topologically non-trivial in a wide range of film thickness and carry conducting spin-filtered edge states that are protected by the (001) mirror symmetry through a topological invariant. Application of an electric field perpendicular to the film will break the mirror symmetry and generate a bandgap in these edge states. This functionality motivates us to propose a topological transistor device in which charge and spin transport are maximally entangled and simultaneously controlled by an electric field. The high on/off operation speed and coupling of spin and charge in such a device may lead to electronic and spintronic applications for topological crystalline insulators.

A theoretical prediction by de Gennes suggests that the resistance in a FI/S/FI (where FI is a ferromagnetic insulator, and S is a superconductor) structure will depend on the magnetization direction of the two FI layers. We report a magnetotransport measurement in a EuS/Al/EuS structure, showing that an infinite magnetoresistance can be produced by tuning the internal exchange field at the FI/S interface. This proximity effect at the interface can be suppressed by an Al2O3 barrier as thin as 0.3 nm, showing the extreme confinement of the interaction to the interface giving rise to the demonstrated phenomena PRL 2013.

The change of the quasiparticle density of states in a superconductor due to the Zeeman splitting can lead to highly responsive spintronic devices. This is demonstrated here in the magnetotunneling studies of a supercondcutor/insulator/ferromagnet tunnel junction. A tunnel magnetoresistance (TMR) as large as 36% is obtained, resulting from the conductance variation due to spin-split quasiparticle tunneling, and only occurs in the superconducting state. Our results show that in addition to the naturally existent spin imbalance in ferromagnets (upon which conventional TMR is obtained), we can manipulate tunnel conductance by tailoring spin dependent density of states with interfacial exchange fields, and even with a tunnel junction with both superconducting electrodes PRB 2013.

The use of molecular spin state as a quantum of information for storage, sensing and computing has generated considerable interest in the context of next-generation data storage and communication devices, opening avenues for developing multifunctional molecular spintronics. Such ideas have been researched extensively, using single-molecule magnets and molecules with a metal ion or nitrogen vacancy as localized spin-carrying centres for storage and for realizing logic operations Nature 2013.

Magnetic insulators are known to provide large effective Zeeman fields that are confined at an interface, making them especially powerful in modifying adjacent one- or two-dimensional electronic structures. Utilizing this phenomenon and the other important property of magnetic insulators—spin filtering—here we report the generation and subsequent detection of a large interface field, as large as tens of tesla in EuS/Al/EuS heterostructures with metallic coulomb islands confined within a magnetic insulator barrier. The unique energy profile across this sandwich structure produces spin-assisted charge transfer across the device, generating a spontaneous spin current and voltage. These unique properties can be practical for controlling spin flows in electronic devices and for energy harvesting Nat. Commun. 2014.

(a) Majority and minority electron energy bands of the two FM electrodes. (b) Typical magnetoresistance curve in a magnetic tunnel junction.

(a) A double spin-filter. (b) The barrier height experienced by tunneling electrons depends on the mutual spin alignment of the two spin filters.